Home > Learn and perfect a language > Learning German with CERAN

Learning foreign languages is known to reduce anxiety and increase tolerance and creativity. It provides an opportunity to develop patience and perseverance. It also opens our minds and encourages a new vision, a new way of doing things and a new way of thinking regarding the world around us.

For language learning, we use our very own method of learning which makes us unique. 3 different techniques are proposed and applied during the training courses that enable Learners to gain knowledge of their chosen language.

“Dear Ceran language School, At first, I would like to thank you for the very useful 20 hours English classes you have organized for me. I have the feeling to have quickly progressed my English knowledge level during these last months. But, it’s not a coincidence, I have had a great chance to learn efficiently with Swati Kirtane. Swati reinforces her languages expertise with a complete tools box and a very efficient linguistic methodology approach, I had never saw before. Not only to be an accomplished English teacher, with a natural and strong pedagogy, Swati, softly but surely, has driven me to discover lots of interesting subjects very closed either of my personal or professional interests. She has a clever listening and an obvious human sensitivity that make all the difference. In the education’s world, it’s not every days you meet a teacher you’ll never forget because of his talent. Swati belongs to this category! Congratulations Swati! With her, I don’t have wasted my time.” Janyvonne 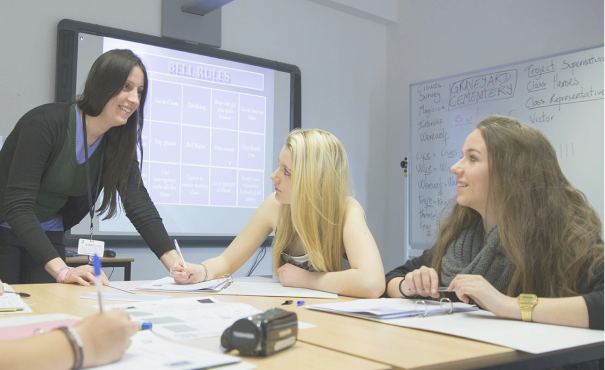 Are you aiming to:

- Develop a new project in a foreign country?

- Prepare for living and working in a new country?

- Speak more effectively in English with your peers?

Our Executive training courses are specifically for professionals and the entire CERAN training team are there to support you with learning German.

Our Young Adult training courses aim to prepare you for higher education or an exam, for an internship abroad or for an initial job interview.

Our Junior training courses for 7-17 year olds aim to develop communication, reinforce knowledge learned at school or prepare them for settling into a new country.

Besides our training programmes, we are authorised to conduct language certification tests, such as TOEIC, Bright and Linguaskills.

Find financing that suits you

You can use financial aid to lower the training costs.

Find the financial aid available in your country.

Immersing yourself in different cultures makes you comfortable with the world around you. It becomes easier to communicate. The more languages we learn, the better we are at learning more of them. It is common knowledge that bilingual brains are less easily distracted. This helps you develop a certain ease when you are in an unfamiliar situation. The CERAN method prioritises the spoken language in language learning. Although spoken language is prioritised, the language trainer remains aware of the importance of the written message for some Learners which also has its place in the communicative approach for addressing the Participant's needs. The spoken and written language are therefore always present. However, emphasis is more on one or the other form of the language depending on the needs expressed by the Learner and according to the proposed activities.

German is the second most spoken language in Europe with its speakers in Germany, of course, and also in Austria, Luxembourg, the Vatican for the Pontical Swiss Guard, Liechtenstein and part of Switzerland. Did you know you can have a lot of fun with the German language? You can actually invent words of your own, that are still real words however, just for fun. While German can be tricky to master, the advantages of this language more than outweigh the difficulties. Here are a few reasons to inspire you to learn Goethe's language. * German and English share the same linguistic DNA. English is classified as a Germanic language because... it evolved from German! Even though Latin and French have had a great influence on English over the centuries, German remains the "Großvater" of English. This proximity on the linguistic family tree means those who have a good command of English have a very useful head start when learning German. It should be pointed out that 26% of English vocabulary has common roots with German. Several languages are vying for the coveted title of "easiest language for English speakers to learn" and while French and Spanish are popular choices, German is certainly worth considering. * The land of poets and thinkers. German philosophers have helped shape western philosophy, such as Kant, Marx and Heidegger. * In the arts and especially music, German was the language of some of the world's most famous classical composers, such as Bach and Beethoven, pivotal figures in western classical music. * Germany is an important economic power. With a GDP of €3,449.1 billion in 2019, Germany is the 4th largest economy in the world after China, the United States and Japan. The German capital, Berlin, is a hub for innovative startups, dubbed the "Silicon Valley of Europe". Therefore, being able to speak German gives you potential and improves your career opportunities. * Discover the world with German. Travelling is one of the best reasons for learning a foreign language. Knowledge of Goethe's language offers you opportunities for travel in Germany, Switzerland and Austria, as well as in Eastern Europe, where German is widely spoken.

Language courses adapted to your needs

If you would like to have more information or book a course, please leave us your contact details so that we can get back to you as soon as possible. Please fill in this questionnaire. All fields marked with an asterisk are required.

Complete the contact form
CERAN uses cookies to improve your experience on the site, to measure audience size, to offer you personalised advertising and to allow you to share content on social networks. You can accept or decline cookies at any time or customize your choice.
CustomiseAccept all
Manage consent